Dont Look Up: What time Is It Coming To Netflix In Your Country? Details Inside

Dont Look Up is a unique sci-fi comedy-drama of 2021 that employs satire to tell the story. The storey follows two low-level astronomers, Kate Dibiasky and Dr. Randall Mindy, who discover an unidentified comet that is on the way to the earth. The duo tries everything in their hands to save mankind. They warn mankind using social media and media tours about the approaching comet that has the power to end the earth from its existence.

Adam McKay directed the film and wrote the screenplay along with writing the storey with David Sirota. McKay also produced satire with Kevin Messick. The satirical sci-fi has received positive reviews from critics. The film has 30 award nominations with 7 wins. The film currently rates at 7.4 on IMDb, holding the 7th position on being the most popular film.

What Time is Dont Look Up Coming to Netflix in Your Country? 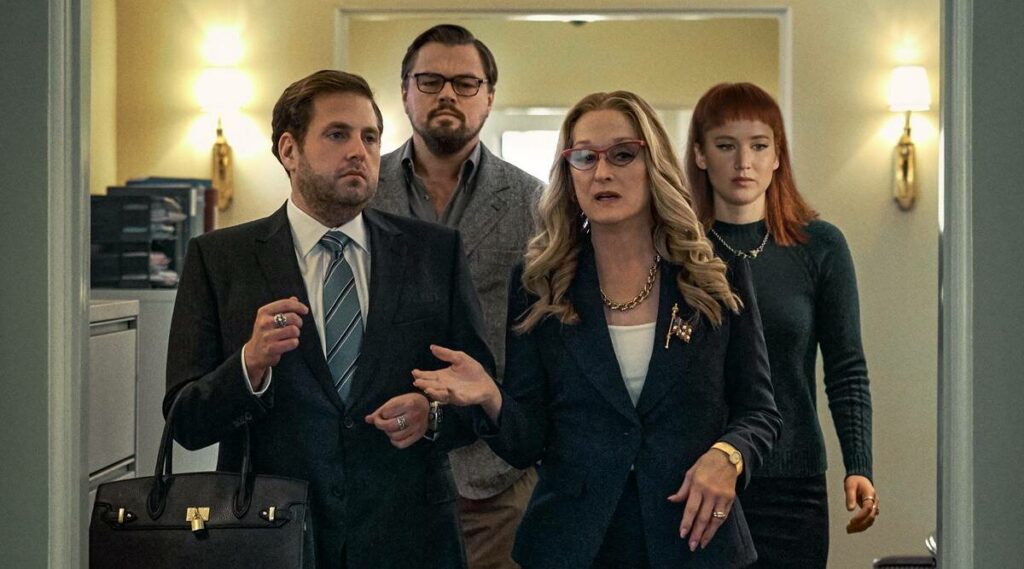 The satirical drama, Dont Look Up will premiere on Netflix on December 24, 2021, at 12:01 AM PST or 3:01 EST. While regionally, timings are not confirmed by Netflix, the film’s webpage is showing that it will be coming on Friday.

According to the synopsis, two low-level astronomers, Kate Dibiasky and Dr. Randall Mindi, are on a path to warn the people about a comet that is approaching the planet.

When Dont Look Up Got Released?

What is Dont Look Up All About?

The comedy-drama movie Dont Look Up follows Kate Dibiasky and Dr. Randall Mindy. They are actually responsible for discovering the comet which is about to hit the earth. Kate was the first one to discover that an unidentified comet is in the direct path of collision with Earth, which she informs her professor Dr. Mindy. Kate and Dr. Mindy try to earn people, but nobody seems to believe them.

With scientist Teddy Oglethorpe, the pair meet President Janie Orlean and Jason’s Chief of Staff, who rebuffs them and their attempts. Their only hope remains the social media on which people ignore them. They use television as an attempt to tell people; however, it fails. When President Orlean became a part of a scandal, she used the news of the comet as a distraction.

The media finally picked up the news and started getting attention from the people. White House announces a launch of a spaceship to divert the comet’s path. However, at an insistence of a businessman looking for opportunities, the plan gets scrapped by the White House. With a limited time for the impact of the upcoming comet, will Kate and Dr. Randall be able to save the world? You will have to see the movie on Netflix on December 24, 2021.

Who are in the Ensemble of Dont Look Up?

Read Now: Vigil: Where To Watch It Online and What Is It About After All?